Rules of Protest for the Political Tea Party Rallies 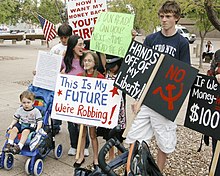 While the Tea Party rallies are typically peaceful events, many attendees have expressed a growing frustration over the seeming ineffectiveness of their message. As congressmen and senators continue to claim that tea party members are few and far between, the importance of peaceful protests assumes a new clarity for participants.

Making a powerful point is the motive behind the gathering; but making a polite impression is also essential for citizens planning a peaceful protest. From message and material to personal reaction to bad behavior in the crowds, tea party protestors should be prepared to assert themselves as good citizens first, political activists second.

Tea party attendees are often model examples of the "guest" mentality while participating in rallies. Grounds remain clean and litter-free, arrests remain virtually undocumented in comparison to more virulent anti-war protests. The perceived indifference of Washington and rising tempers across the nation threatens to change that status, however.

Protestors should remain polite at all costs when confronted by opposing representatives, opposing protestors, and law enforcement officials. "Polite but firm" as a theme is essential; as is the choice of words for expressing anger. Avoid racially-charged words and signs, even if the language is meant as a joke.

If participants disturb the peace or break the law, fellow protestors can contradict their message or actions, but should strive to avoid violence. If a protestor deliberately tries to instigate violence or threaten someone, nearby protestors may need to isolate the individual and alert nearby law enforcement.

Protestors should avoid bringing personal propaganda to the rally, such as flyers for niche groups or events. They should also avoid bringing petitions whose subjects have little connection with the protest's theme. Using a political event as a personal platform or to promote self-indulgent connections may seem bullyish and intrusive to fellow attendees.

When making signs and banners, lean towards clever and funny messages instead of insulting or angry themes. A sign asking whatever happened to the Constitution is less volatile than a sign declaring Obamacare "dead on arrival." Choose words and themes carefully when deciding on props or protest apparel.

Every participant should be armed with a digital camera and a pocket Constitution for personal safety and powerful arguments. The more video footage taken of a large event, the less likely it is that protestors can be unfairly characterized or slandered; it also means any incidents of violence or threats can be investigated more quickly.

When in doubt, always choose a peaceful solution for personal safety and the safety of other protestors. When intimidated by opposing protestors, perhaps a better solution than shouting angry replies would be a crowd rendition of the national anthem, letting patriotism have the last word in the argument.