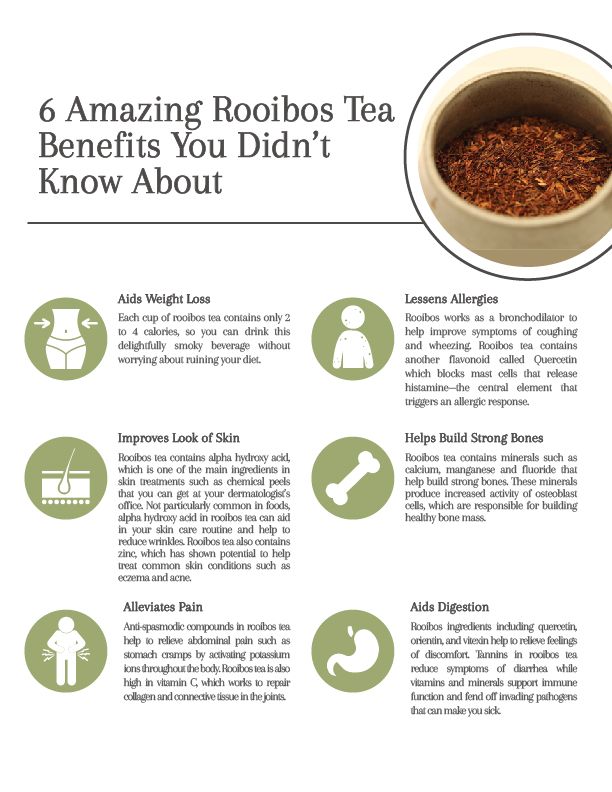 By now you’ve probably tried the green teas and white teas and have become aware of their remarkable health benefits. One healthy tea you may not have had the pleasure of sampling is African rooibos red tea. It’s derived from the stems and leaves of a plant native to South Africa known as Aspalathus linearis. This slight sweet, brilliantly red colored tea is fast becoming one of the hottest trends in the tea industry. Although you’ll find this drink in the tea section, it’s actually not a traditional tea like black or green tea but rather a tisane or herbal infusion. The health benefits of this interesting beverage are just starting to be discovered and appreciated. Here are some of the many benefits of rooibos herbal tea:

Benefits of rooibos tea: High in antioxidants and flavonoids

Rooibos tea purportedly has similar levels of antioxidants as the green and white teas. These antioxidants act as free radical scavengers which appear to reduce the risk of some chronic diseases including heart disease and cancer. Rooibos tea is also a rich source of flavonoids which in addition to their antioxidant capabilities also have antiviral and antitumor properties.

If you can’t drink black or green tea due to caffeine sensitivity, you can still enjoy the delicious taste of naturally caffeine free rooibos tea. This tea not only lacks caffeine but is thought to have a soothing effect on frazzled nerves making it an effective stress reducer. Some people report that drinking a cup prior to bed time helps with insomnia.

Rooibos tea is thought to have anti-aging properties possibly related to its related to its ability to scavenge free radicals which form as tissues age. One study in rats showed that rooibos tea protected against age related damage to the brain. It’s like that more studies will be conducted in the future to further define the anti-aging potential of rooibos tea.

Benefits of rooibos tea: It has a pleasing taste

Most people who sample African rooibos red tea find the flavor to be pleasing. It’s naturally slightly sweet so there’s less need for added sugar or artificial sweeteners. Many people actually prefer its taste over that of green and white tea. Its good taste may derive partially from its low level of tannins which tend to add bitter undertones to tea.

You won’t suffer guilt when you indulge in a cup of this tea. It has no calories and drinking it throughout the day may have an inhibitory effect on your appetite making it an effective adjunct for weight loss.

You can find African rooibos red tea at most tea stores and in an expanding number of supermarkets. If your local supermarket doesn’t carry it, check with your natural food grocery store or co-op. They still don’t serve this tea at Starbucks as of yet, but it may just be a matter of time before this naturally healthy tisane makes its grand appearance next to the lattes and cappuccinos.